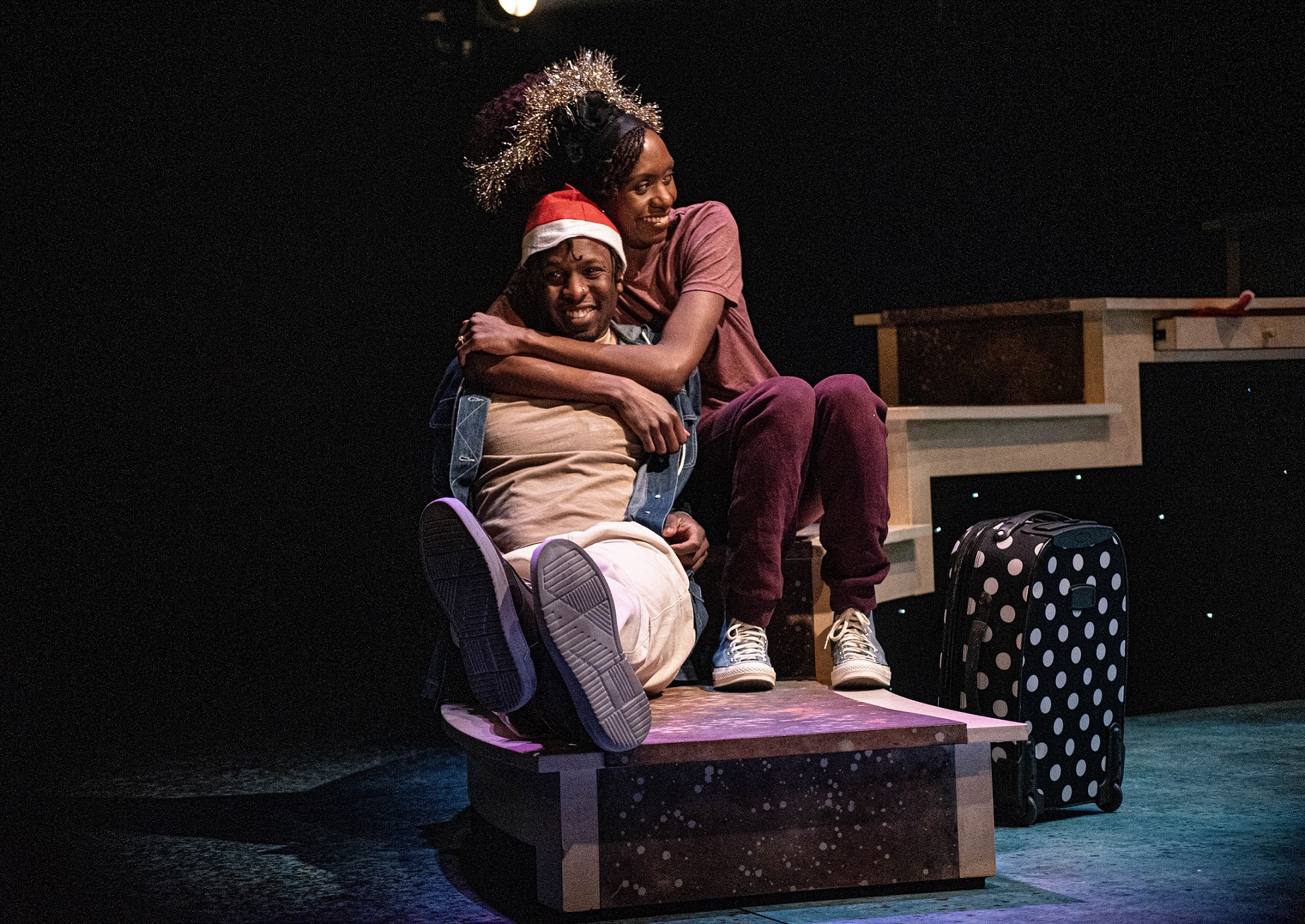 Earlier this year, Talawa Theatre Company and Radio 4 teamed up to showcase three new audio dramas, which included Sian Carter’s RUNNING WITH LIONS  (which you can listen to on BBC Sounds website). Originally just under 30 minutes, this domestic drama has been fleshed out as a 2-hour stage play at Lyric Hammersmith Theatre. Directed by Talawa’s Artistic Director, Michael Buffong, Carter’s intimate and earnest stage debut examines the relationships and dynamics between three generations of one grieving British-Caribbean family.

“Llewllyn and Johnson stand out in their portrayals of the comedic and slightly cringey matriarch and patriarch. Their chemistry is electric and when they reminisce about old-school memories together, we get a palpable sense of a long and loving relationship”.

The family’s grandparents Shirley (Suzette Llewellyn) and Maxwell (Wil Johnson) prepare to throw a homecoming party for their daughter Gloria (Velile Tshabalala) who’s been recently discharged from a psychiatric ward, while simultaneously celebrating the end of their granddaughter Imani’s (Ruby Barker) secondary education. But it soon becomes very clear that the grandparents’ dismissal of Gloria’s mental illness (as well as Maxwell’s inflexible faith and Gloria’s concern with her family’s standing in the community) has created many rifts in the family. This is a family that has deep love for each other, and that wants to share together their grief over loss of son, brother, and uncle Joshua, (Nickocolia King-N’da) – but they can’t until each member comes to terms with their own individual struggles.

Carter is a fearless and bold writer. In this first play of hers, she isn’t afraid to look, often uncomfortably, at religion and the stigmatisation of mental health in Caribbean culture. While the play’s second and third generation immigrants didn’t quite exemplify Black Britishness (nothing about the way they spoke or dressed suggested they grew up in or lived in London), Carter’s writing triumphs in its authentic profile of Caribbean grandparents. Llewllyn and Johnson stand out in their portrayals of the comedic and slightly cringey matriarch and patriarch. Their chemistry is electric and when they reminisce about old-school memories together, we get a palpable sense of a long and loving relationship.

“This is a timely and empathetic story”

Carter especially masterfully demonstrates how music brings families together and sound designer Tony Gayle how it can be used to reveal family dynamics. There is a moment in the last scene where we get to see an intimate tableau of Gloria/Maxwell and Joshua/Shirley as dance partners while a vinyl record is playing. In a play that sometimes felt too long and static, I cherished these displays of intimacy.

The stage play suffers from structural and pacing issues, which are perhaps engendered in the scaling up of the adaptation. The set, designed by Soutra Gilmour, is strikingly beautiful when the star-studded stairs sparkle in the darkness of the scene changes. The dialogue does a lot of heavy lifting throughout the play; we are never shown the extent of Gloria’s mental illness but instead are only told details about her diagnoses in a way that feels overly expositional.

Where the play and actors shone was in their heart-warming and tender reconciliations. At the centre of the many, many rounds of laughter, you could feel how much the audience cared for these characters. Despite the play’s shortcomings, there’s comfort to be found in it – this is a timely and empathetic story which Buffong rightly chose to be adapted from radio to the theatre.

NEED TO KNOW: Running With Lions is at the Lyric Hammersmith until March 12 | See listing | Meet the Cast | See rehearsal pics
BOOK TICKETS