As luck would have it, I find myself watching a production of Romeo & Juliet for the third time in as many years. Walking into the Globe theatre feels important, like you are literally stepping on a piece of literary history. The Globe.  Shakespeare’s Globe.  Renovated to look exactly how it was.  If you’re going, go see it quick as good weather (or at least no rain) is a requirement.  You can’t help but wonder who thought it was a good idea to build a roofless theatre in London but saying that; it’s a gorgeous venue and you can imagine with just a squint what it was like to be amongst the Elizabethan crew.

This version has great music to help it along and excitingly, the musicians play and hang out for a bit in the audience

It’s of no surprise that this version of Romeo & Juliet, in the same vein as the other two I’ve seen in recent years, is also a modern twist on the classic. Yes, even in the Globe they ‘haf fe mix and blend’. Apparently, it’s always been a thing to remix and adapt Shakespeare plays and the bard would have wholeheartedly approved.

The cast burst on stage in a blaze of red, white and black; to a backdrop of Jazz/house fusion music and the eye is immediately if not quickly, drawn to Romeo.  This handsome fellow looks strangely familiar. It’s none other than Alfred Enoch who plays ‘Wes’ in How to Get Away with Murder. Oi oi… at least if nothing else, there will be eye candy. 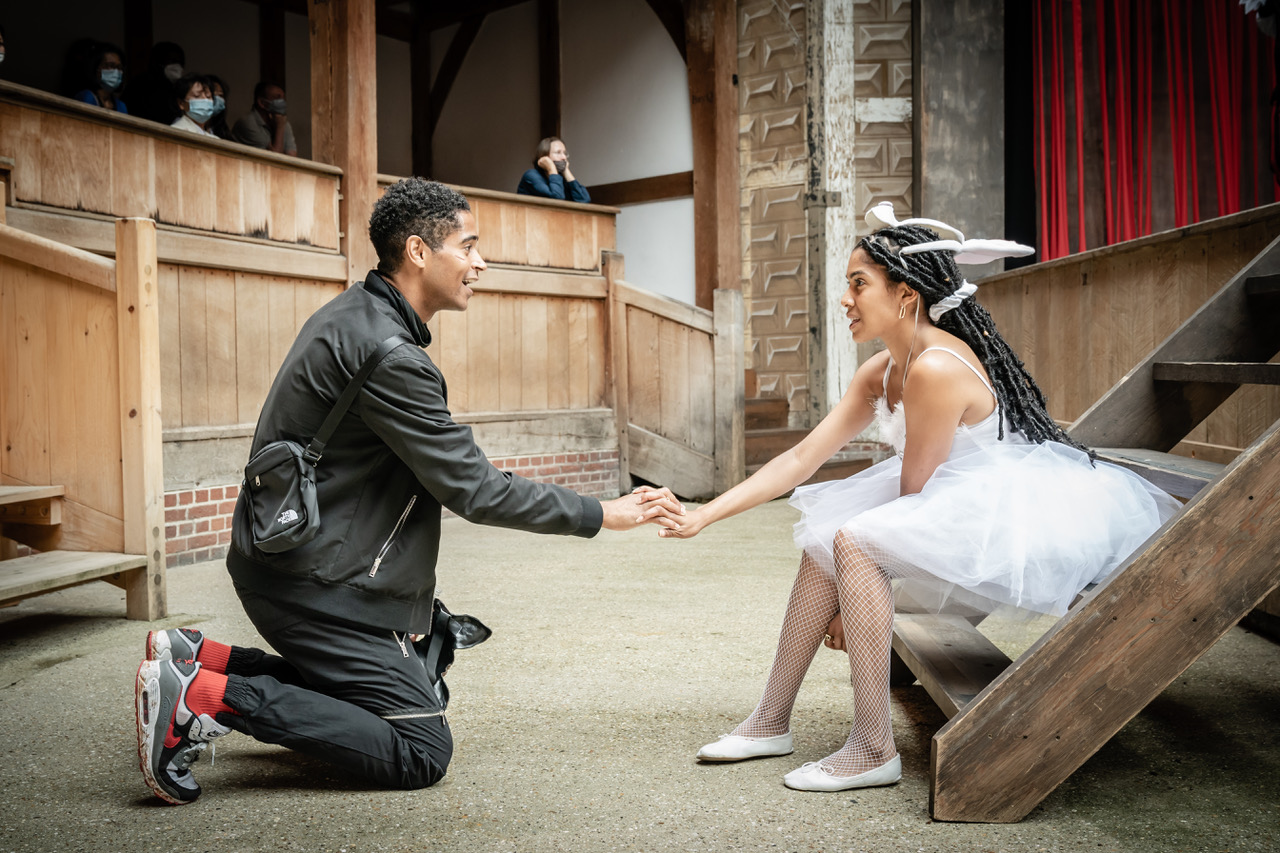 I don’t need to relay the well-thumbed story of R&J but this version has great music to help it along and excitingly, the musicians play and hang out for a bit in the audience. The Prince’s (Dwayne Walcott) rendition of Lionel Ritchie’s ‘Hello’ is fab!  And Juliet (Rebekah Murrell) sings a piece of Jill Scott’s ‘Lyzel in E Flat’ in the famous balcony scene that has me sold.

There is a black screen with statements written in red that changes throughout the play.  It lends a bit of modern social commentary that is sobering, food for thought and 100% relatable to the story.  Most poignant for me was:  “The rational part of a young person’s mind isn’t fully developed until 25” , “75% of kids with mental health problems are not receiving treatment” and “The loss of one close to us is the main contributing factor to suicide and the leading cause of death among all under 35s” -talking of which, Romeo does a most impressive long, drawn-out death which draws giggles from my companion. This is a great version of Romeo & Juliet, well worth a watch.

This is a great version of Romeo & Juliet, well worth a watch.   All the actors do a fine job hamming it up and providing a few laughs where necessary

All the actors do a fine job hamming it up and providing a few laughs where necessary and Ola Ince director and dramaturg has done a good job bringing Shakespeare’s masterpiece once again, bang smack up to date.

NEED TO KNOW: Romeo & Juliet is at Shakespeare’s Globe until 17 October 2021 | Find out more

The Tempest by William Shakespeare – review:

The Darkest Part of the Night by Zodwa Nyoni – review: